After a record drop in September, Japan’s foreign reserves went down even more in October, the Ministry of Finance said on Tuesday. This was due to the largest amount of yen-buying and dollar-selling intervention ever.

Market players are looking at Japan’s huge amount of foreign assets and its history of intervention to see how much more it might be willing to spend on the currency market. However, the government isn’t saying much about intervention.

Tohru Sasaki, head of Japan Markets Research at JPMorgan Chase (NYSE: JPM) Bank, said, “I wouldn’t be surprised if the government steps in again if dollar gains speed up and reach a new high above 152 yen.”

“But I don’t think Japan can keep selling large amounts of U.S. Treasury bonds to buy yen for an indefinite amount of time. There should be a limit on how close it can get to its ally, the U.S.

Japanese officials have said that they stay in close contact with their U.S. counterparts, putting to rest rumours that the U.S. would be against selling dollars to weaken a currency while the U.S. raises interest rates to fight inflation.

The ministry said that Japan’s foreign reserves dropped for the third month in a row, to $1.19 trillion at the end of October. This is still the second-largest amount in the world, after China. The $43.5 billion drop was the second-largest drop from one month to the next in history.

Officials said that the currency intervention and rising foreign bond yields made up for other things that would have helped the reserves, like higher valuations of other foreign assets and income gains from holding foreign bonds.

By asset type, foreign bonds make up four-fifths of the reserves. Most of these bonds are thought to be U.S. treasuries, which were bought when the yen was strong during times of dollar-buying intervention.

Foreign bonds fell the most among the reserves in September, and they fell the second-most last month, to $941 billion, which was the second largest drop. Officials wouldn’t say more, but market watchers think that the drops are because U.S. Treasury bonds were sold to buy yen.

Deposits, which are mostly held at foreign central banks and the Bank for International Settlements and make up about 10% of the reserves and can be easily turned into cash, grew for the second month in a row in October, reaching $137 billion.

Separate data on intervention, like quarterly and daily totals, showed that the government did not support the yen in a sneaky way in September, when they spent 2.8 trillion yen to do so.

Last month, when the yen hit a 32-year low near 152 yen to the dollar, Japan spent a record 6.35 trillion yen on intervention.

The yen has stayed weak because the Bank of Japan has stuck to its plan to keep interest rates very low. This is in stark contrast to the aggressive rate hikes by the U.S. Federal Reserve. 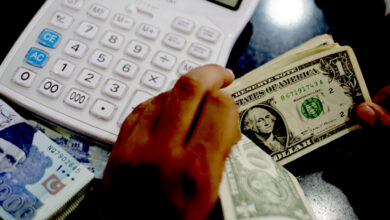 The US dollar has surpassed the Rs200 mark in interbank trading. 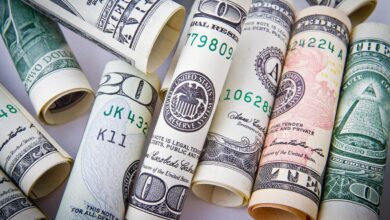 As investors worry about the possibility of a recession, the dollar rises against the yen and the Australian dollar falls. 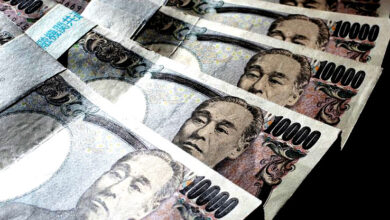